Canada’s the great Northland of North America (though, of course, you’d want to slot Alaska and Greenland in there as well) and one of the best places in the world to play around and snowshoe in the white stuff. Getting out and about in the wintry outdoors is an intrinsic part of Canada’s culture—and still part of the essential lifeways for many Canadians, of course.

On the recreational side of things, you’re spoiled for choices when it comes to destinations for a snowshoeing-centered Canadian vacation. Here at the Crescent Moon blog, you’ll find guides to great snowshoeing spots in different provinces; in this post, we thought we’d highlight some general regions and individual locations that are particularly rich and varied in snowshoeing opportunities and resources.

Head to any one of the following areas with a pair of foam snowshoes or aluminum snowshoes, and you’re guaranteed some of the very best winter trekking anywhere! 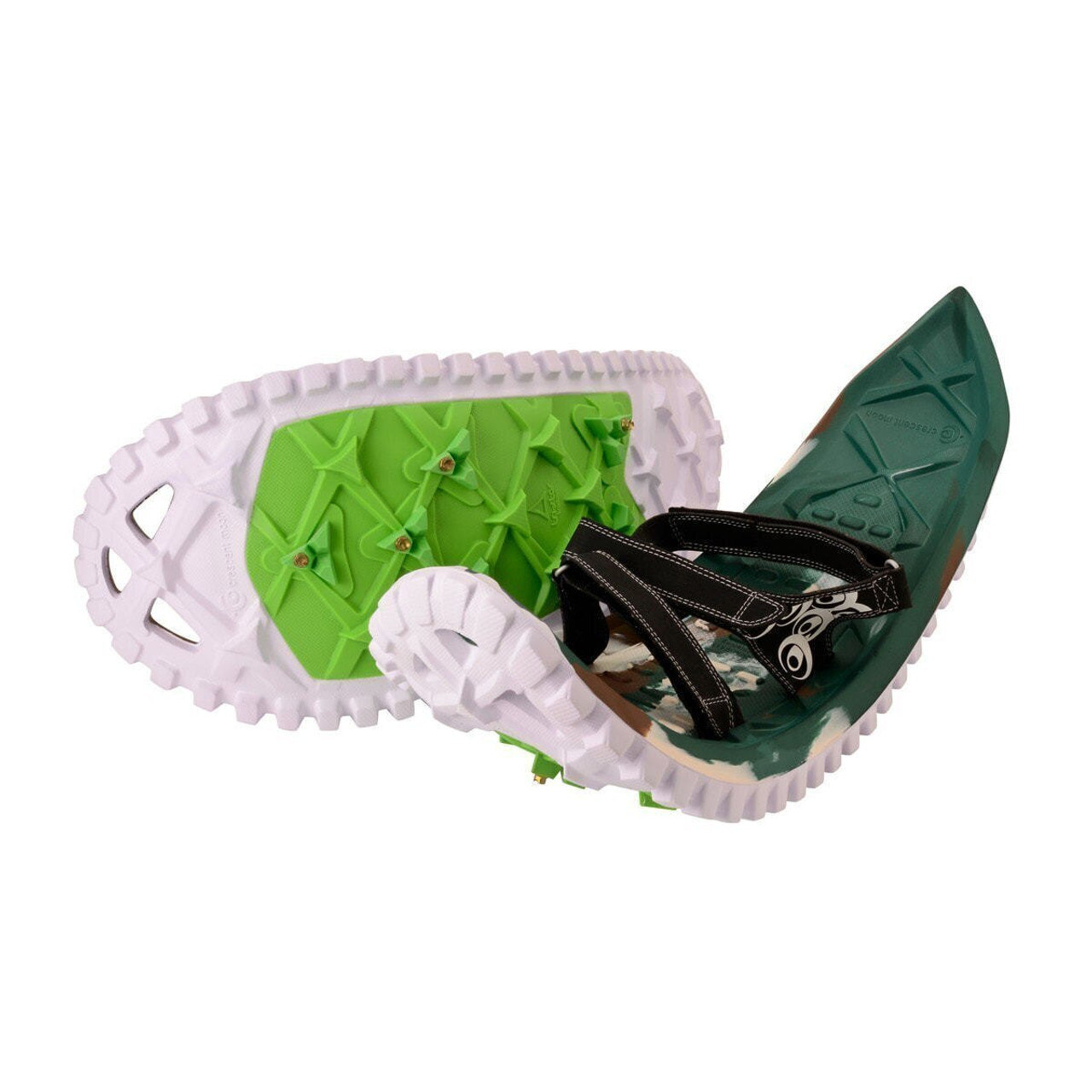 The sheer folded layer-cake peaks of the Canadian Rockies—from the castellated to the dog-toothed to the saw backed—create some of the world’s most glorious mountainscapes. Frosted over with a generous snowpack, this grand scenery rewards with absolutely top-class snowshoeing. Whether you’re looking for beginner-level, family-friendly outings or ultra-remote backcountry camping adventures, the Canadian Rockies deliver in spades.

You certainly can’t beat such internationally renowned national parks as Banff, Jasper, and Yoho for snowshoeing splendor. We’ve got a whole blog post devoted to Banff’s snowshoeing attractions, from the Ink Pots to the glazed-over shores of Lake Louise. Meanwhile, Jasper—which, at some 4,200 square miles, is the biggest Rocky Mountain national park in Canada—has equally ample snowshoeing opportunities: Marvel at the imposing bulk of Pyramid Mountain above the valley of the Athabasca River from the trails on Pyramid Bench, bask in the postcard-caliber scenery snowshoeing to Medicine or Beaver lakes, or climb to the Wilcox viewpoint for a stunning prospect of the Columbia Icefield, the biggest icefield in the entire Rockies. Yoho’s Emerald Lake is another superlatively scenic snowshoeing spot.

Camp out in the winter wilds (with the proper gear and know-how, of course), snuggle up in a backcountry hut or lodge, or enjoy cozy accommodations in towns such as Banff, Jasper, and Fields.

The Pacific Ranges in southwestern British Columbia forms the southern, rain- and snow-hammered ramparts of the mighty Coast Mountains jagging northwards to Alaska. This region ranks easily among the incredible winter wonderlands for outdoors people in North America. For instance, abutting the big city of Vancouver, you’ve got Cypress Mountain and Cypress Provincial Park, which claim miles of snowshoeing trails and options for both guided and self-guided circuits amid heavy-drifted forests.

Then there’s the resort hub of Whistler. Their many popular snowshoeing routes include the Rainbow Falls Trail and the Train Wreck Trail along the Cheakamus River, as well as treks into the gorgeous greatness of Garibaldi Provincial Park, as to Cheakamus Lake and the Elfin Lakes.

You’ve got no shortage of plush “base-camp” options in Vancouver, Squamish, Whistler, and other communities, plus of course, endless winter-camping at your disposal in the Pacific Ranges.

The Riding Mountain Biosphere Reserve, anchored by Riding Mountain National Park and encompassing surrounding communities and countryside, constitutes one of Manitoba’s natural treasures. Riding Mountain and the Manitoba Escarpment form a highland realm that feels downright magical given its proximity to vast farmland flats and form a meeting ground between prairie, temperate deciduous forest, and the taiga. As it happens, this is a great place to go snowshoeing as well.

In Riding Mountain National Park, you’ve got close to 80 miles of winter trails to enjoy, including such routes as the Arrowhead, Bayduk Lake, Brulé, and North Escarpment trails. You can also strike off cross-country, of course, relishing the deep snowpack and the chance to look for the tracks of such wildlife as wolves, red foxes, and elk. (Don’t miss the captive bison herd at Audy Lake)

The oldest Canadian provincial park (dating back to 1893!) and still one of the best known, Algonquin offers a nearly 3,000-square-mile spread of lakes and transitional forests in southeastern Ontario—just as enticing in winter as summer, and all of it just a snowball’s throw from Toronto.

Highway 60 provides plowed wintertime access to the park, and from its corridor, snowshoers can hike such snowbound routes as the Algonquin Logging Museum, Two Rivers, Mizzy Lake, and Old Railway Bike trails. Remoter country awaits along the Highland and Western Uplands backpacking trails. You can also tromp just about anywhere in the park off groomed ski trails. Watch for moose and stop and occasionally listen for (if you’re lucky) the howl of a wolf on the crisp winter air!

On the other side of the continent from B.C.’s Pacific Ranges, the island of Newfoundland gives snowshoers a premier North Atlantic exploration zone: from fjord coast to stony plateaus, scrubby caribou forests, and burly mountains. The variety of experiences and the quality of the scenery—and the quantity of snow, too—make it a top snowshoeing destination in Canada: You can tromp along fine loops in Pippy Park, right in the capital city of St. John’s, or marvel at the wild coastlines and Long Range Mountain heights of Gros Morne National Park, a real beauty.

Use our Crescent Moon foam and aluminum snowshoes—plus prime accessories such as ski poles and heel lifts—when you’re reveling in the plentiful winter glories north of the 48th parallel!