One of the great pleasures of snowshoeing is the chance to see the tracks and traces of wildlife while out on a trek. A snowy landscape offers the best overall conditions for seeing an animal sign. The leisurely pace and go-anywhere flexibility of foam snowshoes provide ample opportunity to detect and follow the wintertime pathways of large and small critters.

Tracking is an art and a science, and one short article such as this can only sketch out the simplest basics and round up a few miscellaneous tips. We recommend getting your hands on one of the numerous excellent field guides to wildlife tracks and tracking, among them Mark Elbroch’s Mammal Tracks & Sign: A Guide to North American Species or James Halfpenny’s Mammal Tracking in North America. These are great for slipping into your daypack when heading out on the trail! 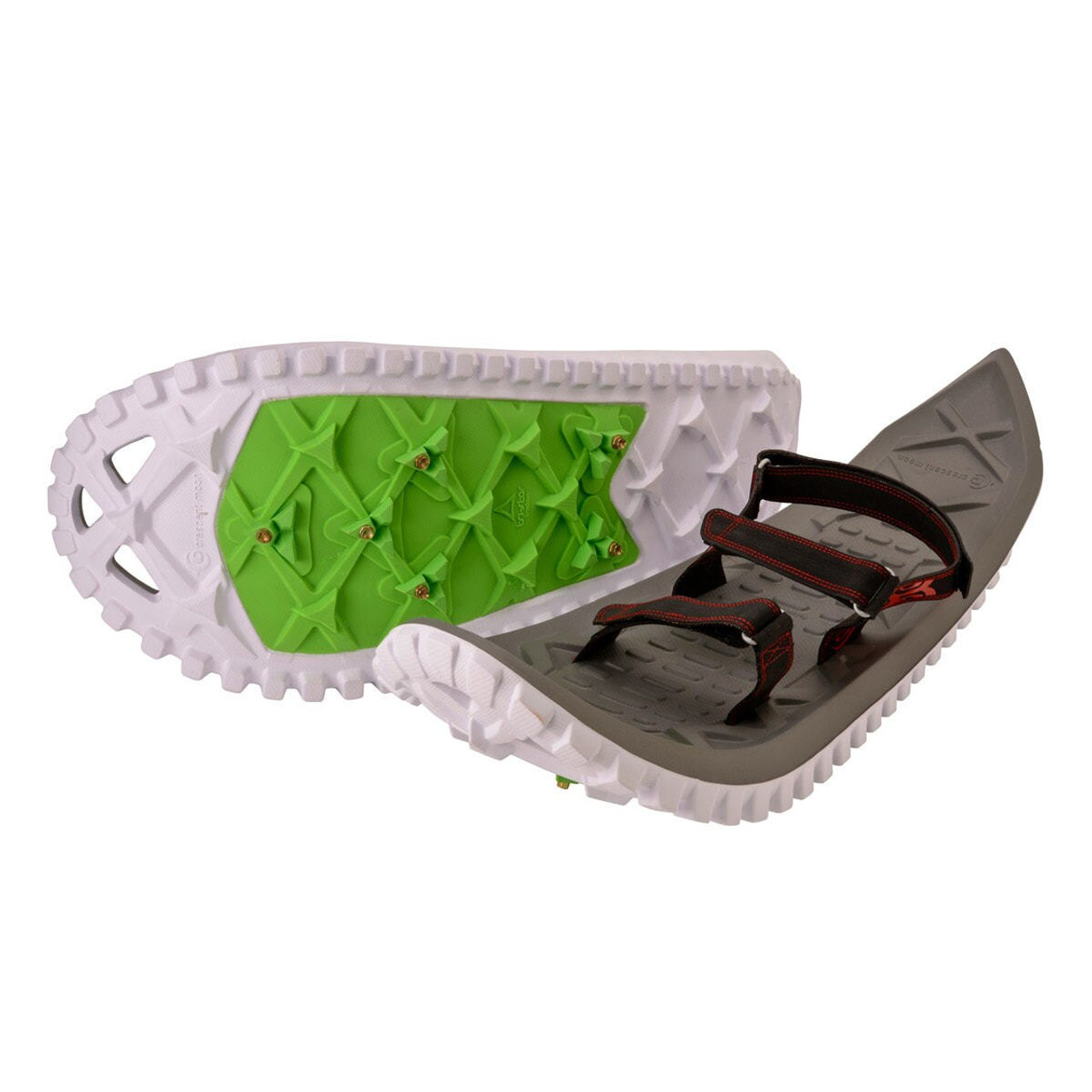 You can find animal tracks with the right snow conditions just about anywhere you might be snowshoeing: from city parks and greenways to the deep wilderness. And while you’ll likely run into the traces of animals crossing a snowshoeing trail or unplowed road, these corridors also happen to be well used by many critters, which will happily follow along for extended distances. Even such rarely seen and elusive carnivores as gray wolves and mountain lions often walk snowy roads and trails (and leave scat along them as well).

Depending on the weather, tracks left in snow may last for days, even weeks, though they’ll degrade over time and become harder to read. Heading out snowshoeing the day after a decent snowfall allows you to spot fresh-laid prints: always a thrill to see, and typically the easiest to decipher and identify.

One of the aforementioned tracking guides or an analogous reference competing with drawings and photographs is the way to learn how to identify tracks to species. There are, however, some general features to key into with just about any print.

Look at the general shape of the track: circular, oval, rectangular, etc. How many marks compose a single track? The simpler, blockier prints left by hoofed mammals are usually easy to distinguish from the toed tracks of carnivores, rodents, lagomorphs (rabbits and hares), and other “digited” animals. For hoofprints, consider (again) their overall shape and the relative sharpness or bluntness of the hoof tips.

For toed tracks, count the number of toe marks and assess their shape and the shape of the footpad’s. Does the track show claw marks or not? Wild felids such as bobcats and mountain lions have retractable claws and often leave claw-less prints, while members of the dog family have non-retractable claws that frequently register in tracks. That said, cats may leave claw marks when climbing slopes or negotiating icy terrain. Depending on snow conditions, coyotes’claws and especially featherweight foxes often don’t register, so this isn’t a foolproof diagnostic.

It’s a good use to carry along measuring tape or a ruler when snowshoeing so you can measure tracks and trackways you come across: the length and width of individual tracks, the stride between consecutive tracks left by the same foot, and the breadth oR “straddle” of the trackway itself. Although there’s a fair amount of overlap, size can sometimes be a certain identifying feature when distinguishing between related species: The dimensions alone of a moose hoofprint set it apart from those of white-tailed deer, for example, while a five-toed mustelid track over four inches long and wide is likely to be that of a wolverine rather than, say, a fisher.

Zooming out from individual prints, look at the tracks’ pattern: the arrangement of the prints, how spaced-out or clustered they are. These patterns can sometimes help you distinguish between track-makers: Hopping rabbits and tree squirrels leave similar-looking track clusters, but the front paw marks of rabbits are usually offset in a diagonal, while squirrels are set in parallel. The trackway patterns can also clue you in to whether an animal was walking, trotting, or bounding.

It can be challenging to tell apart tracks left by domestic dogs on a road or ski trail from the similar-looking prints of their wild relatives: foxes, coyotes, and wolves. There are a few clues to look for that can narrow the playing field, though.

A set of canine tracks in close association with human footprints that appear to be roughly the same age is almost assuredly a dog’s. Dog trails tend to be more meandering and all-over-the-place than those of wild canids, which are more likely to conserve their energy and keep to a fairly straight course. It’s not an ironclad distinction, but dog tracks are often broader than a coyote’s, which are classically fairly narrow in form. The biggest canid tracks—those, say, five inches or so long and wide—are likely only to be those of a wolf or a large domestic dog breed, though remember that snow or weather conditions can warp the size of older tracks.

Other Signs to Look For

Identifying wildlife scat is its own sub-branch of tracking that is best learned using a good field guide with a photo key. In winter, the hard pellets left by deer, elk, and moose are easy to identify. Carnivore scat is often ropey and contains visible hair and/or bones.

If you’re snowshoeing in soft, powdery snow, you might luck out and see the wing marks left by an owl or hawk swooping down upon a prey item—maybe even detecting the tracks of a small mammal abruptly ending where the feather traces show. If you stumble upon, say, a deer carcass in the snow, check for the wing marks and dinosaur-like prints left by ravens, crows, eagles, magpies, chickadees, and other scavengers.

It takes a lot of practice to hone your tracking eye, but that’s part of the fun: It means that much more snowshoeing, after all! Studying a good tracking guide or two and spending a lot of time looking at tracks in the field, you’ll find yourself becoming a more discerning reader of critter trails and traces.

By the way, if you happen to see an animal in the flesh out on a snowshoe—a deer, say, or a galumphing skunk—consider heading over and inspecting its tracks (once the animal’s moved off, that is—you don’t want to disturb or otherwise stress it, especially in this most challenging season for wildlife). Nothing’s better for improving your skills than seeing the marks freshly left by an animal whose identity and gait you were able to observe directly.

Now, grab those Crescent Moon foam snowshoes and head out for some snow-tracking!