Snowshoers in steep country always need to be avalanche-savvy. Avalanches are the kind of danger that are extremely easy to disregard if you’ve never experienced one (or taken the time to educate yourself), but they can be terrifyingly lethal. Close to 30 people a year die from avalanches each year in the U.S. Along with skiers, snowmobilers, and mountain climbers, snowshoers are among the outdoor users most at risk.

But those snowshoers who do make an effort to learn about avalanche safety and who stay alert and aware when trekking will have a great chance of steering clear of these frightening snow slides—and focusing on the fun stuff out there.

One blog post such as this can’t possibly cover avalanche safety in adequate detail, but it hopefully will give you a framework for digging deeper into the subject.

The abrupt release of snow off a mountainside to form a fast-moving avalanche can seem like an impossible-to-predict occurrence: just a hazard of the winter (or spring) mountains to blindly take your chances with. But we now know a great deal about how and when avalanches occur. While it’s critical to closely follow weather and avalanche forecasts when snowshoeing in snow-slide country, you can gather a lot of useful information yourself as you go along.

You can roughly divide avalanches into two categories: loose-snow (or point-release) avalanches that typically release in one localized spot and spread out downslope; and slab avalanches, where blocks of snow break at their edges and slide. Slab avalanches, which are often triggered by weak layers within the snowpack that suddenly fail, are more challenging to forecast than loose-snow avalanches, which commonly result when weather events—which could be snowstorms or simply strong winds—pile up a lot of snow in short order that soon enough succumbs to gravity. Smaller loose-snow avalanches are often called “sloughs” or “sluffs” and can help stabilize a slope and reduce the risk of bigger avalanches. Nonetheless, any kind of avalanche can be life-threatening—even a little sluff.

Things to Key Into In Regards To Avalanche Safety

The three elements avalanche-aware snowshoers focus on both before and during their outings are the weather, the snowpack condition, and the terrain they’re traversing. These are the main physical factors that determine avalanche risk.

The weather’s a huge deal. A rapid accumulation of snowfall—particularly more than an inch per hour—ramps up the avalanche risk. As we alluded to already, the wind itself can achieve the same effect even in the absence of precipitation. If winds in the mountainous area you’ll be snowshoeing in are blowing 10 miles or more per hour for a while, you should expect some risky deposits of snow—“wind slabs”—on leeward ridge brows and slopes. Temperature is another important aspect of weather to pay attention to. Snowshoeing during a rapid warmup can be risky; given thawing, meltwater-lubricated slopes may be shedding. If temperatures at the start of the snowstorm are cold but then warm as the storm progresses, be wary: This may result in wetter, heavy snow lying atop drier, lighter snow, creating a precarious imbalance.

That last point suggests the importance of knowing how to assess the condition of the snowpack. This is about the most technical part of avalanche safety, but something anybody can familiarize themselves with. The best way to do so is to take an avalanche safety course involving some fieldwork with an instructor. Armed with a shovel—such as the Telescoping Shovel With D-Handle we offer here at Crescent Moon—you can perform a variety of tests to assess the stability of the snowpack you’re traveling over, which goes a long way toward helping you route your way over the safest ground possible.

The terrain is another vital element to pay attention to. Most avalanches occur on slopes between 25 and 45 degrees, especially between 35 and 45 degrees. There are many ways to estimate with decent accuracy the cant of the hillside or mountainside you’re crossing or climbing, including the use of inexpensive clinometers or easy-to-use smartphone apps; the important thing is learning how to make that estimation and doing so regularly as you snowshoe.

Stay aware of slope aspect as you travel, and favor, all else being equal, the generally more stable, less-snow-loaded windward slopes. Avoid whenever possible gullies and other “terrain traps,” and minimize how much you’re traveling below cornices, which can break off without warning and cause avalanches on the slopes below. You’re not necessarily safe on level ground, by the way—not if you’re snowshoeing across the “runout zone” along the base of a slope where large avalanches may surge some distance over the flats. Flagged or broken trees can be indications of such runout zones.

What to Carry in Avalanche Country 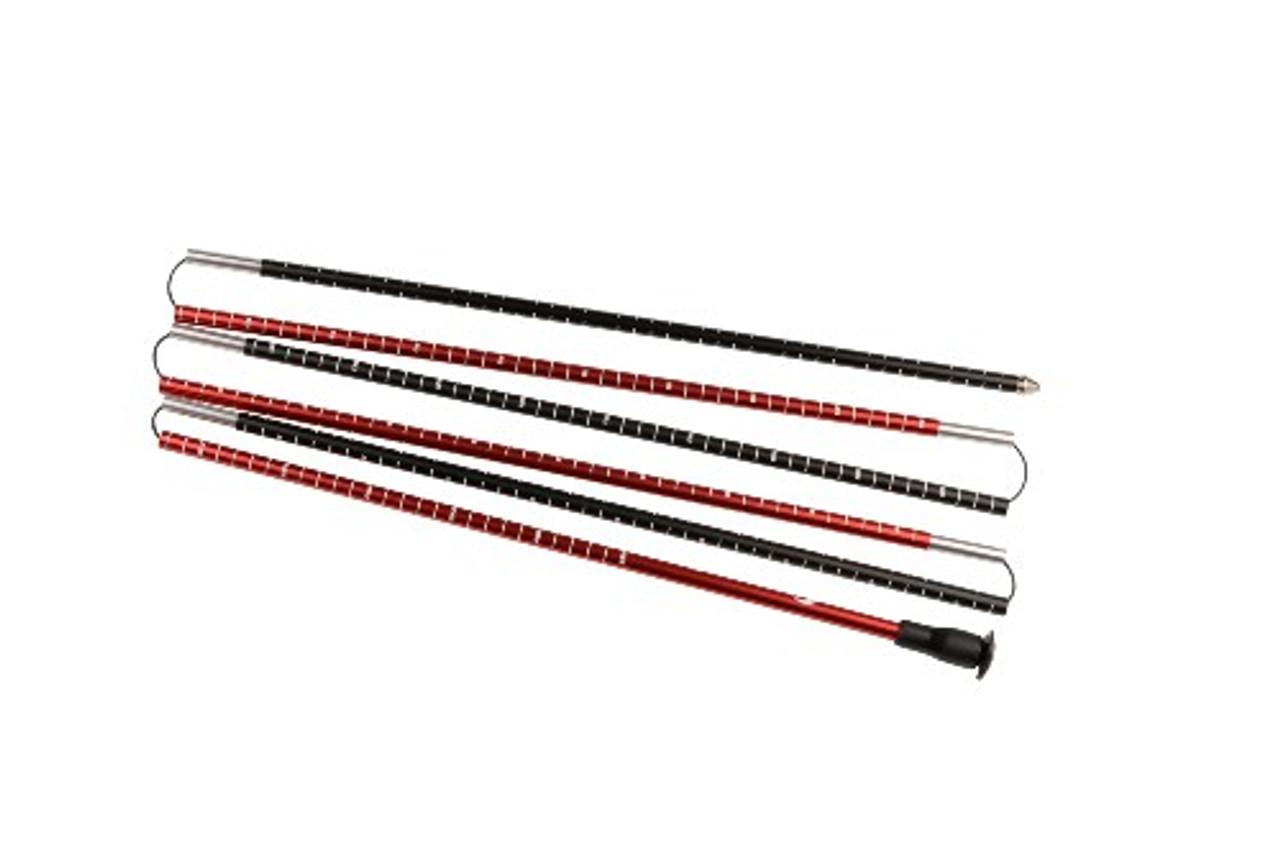 Carrying proper equipment is another crucial part of avalanche safety for snowshoers. The shovel we’ve already mentioned is not just vital for testing snowpack but also for digging out avalanche victims. An avalanche probe (like ourcollapsible, 270-centimeter Crescent Moon model) is also essential for finding buried people. Avalanche beacons and airbags are other pieces of gear any snowshoer regularly out and about in avalanche terrain should carry.

Remember, avalanches are nothing to mess around with. When in doubt about the weather, snowpack, or terrain, don’t hesitate to head back to the trailhead!