Few states pack in as much sheer scenic variety as Oregon, and snowshoeing here is top-notch. The Oregon landscape ranges from sagebrush steppe and greasewood desert to temperate rainforest and oak savanna, and from glacier-clad peaks and rimrock canyons to crashing ocean headlands. The Beaver State’s loftier mountains and highlands offer lots of snow to play around in during the winter and well into the spring—heck, even into early summer in the highest country of the Cascades, Blues, and Wallowa's. It all adds up to a vast tableau to explore as a snowshoer: You simply won’t run out of new winter adventures here.

We’ve rounded up a shortlist of some of the very best spots in Oregon for slipping into Crescent Moon foam snowshoes and digging some Northwestern winter vibes! 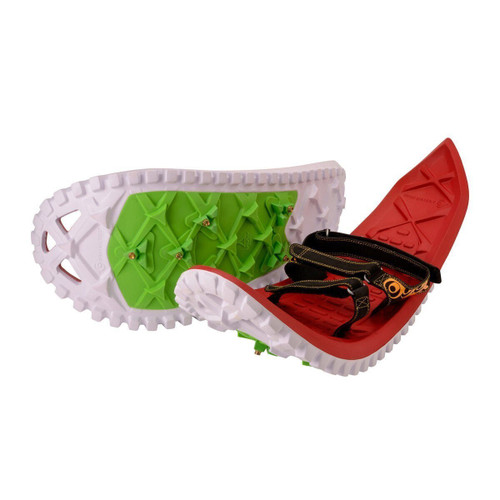 Oregon’s highest peak is easily one of the state’s best hubs for snowshoeing, with a whole slew of designated snow-parks, extensive (and extensively snowed-in) backcountry, well-plowed access roads, and a long-lasting snowpack. Timberline Lodge is situated high on the shoulders of the 11,249-foot stratovolcano among whitebark pines and mountain hemlocks. This area makes for a perfect jumping-off point for epic snowshoe jaunts. Be sure to check out the brinks of the Zigzag and White River canyons. Trillium Lake, which stages an iconic view of Mount Hood looming near the north, is another super-popular snowshoeing zone.

Dominating the central reach of the Oregon Cascades, the Three Sisters include the state’s biggest glacier, its third-highest peak (10,358-foot South Sister), and some of its most extensive and head-spinning alpine scenery. A stone’s throw from the boundary of the Three Sisters Wilderness—the most popular and one of the largest wilderness areas in Oregon—as well as the nationally renowned Mount Bachelor Ski & Snowboarding Resort, the Dutchman Flat Sno-Park, provides access to a few snowshoe-exclusive routes as well as extensive multi-use trails. The four-mile round-trip climb up to 7,775-foot Tumalo Mountain, which delivers a stunning view dominated by those majestic Three Sisters, is one of the state’s great winter treks.

Part of a whole complex of great snowshoeing and Nordic opportunities in the Willamette Pass vicinity, Salt Creek Falls Sno-Park is especially notable for two snowshoe routes: one short and easy, the other a bit more demanding. The easy option is the half-mile walk on an unplowed road to Salt Creek Falls itself: a stellar 286-foot plunge that ranks among Oregon’s very tallest waterfalls. On the more involved side, you can tromp up snowy Road 5894 to the snow shelter atop Fuji Mountain, where you can bask in a memorable prospect of 8,748-foot Diamond Peak and, should you so choose, spend a cozy overnighter.

We’re not tiptoeing onto thin ice, so to speak, in saying that Crater Lake is one of the best snowshoeing spots in the entire country—and heck, probably the world. After all, the incredibly pure, incredibly deep lake occupying the jagged-rimmed caldera of Mount Mazama in the southern Oregon Cascades is one of the most beautiful bodies of water on the planet. Furthermore, this is a majorly snowy place, racking up some 450 inches on average per year (with a record documented annual snowfall of nearly twice that).

The Rim Drive encircling Crater Lake is unplowed in the winter, providing one of Oregon’s preeminent winter routes. Whether you’re doing as most visitors do and taking an out-and-back day trip, or—using the proper experience and preparation—tackling the entire 31-mile circumambulation, which typically takes a minimum of three days. Crescent Moon foam snowshoes prove to be an excellent choice for multi-day treks as they are lightweight and easy to travel with.

Northeast Oregon has its own high, snowy mountains that, scenically and ecologically, show somewhat more kinship with the Rockies than the Cascades far to the west. The Elkhorns—the highest subrange of the extensive Blue Mountains stretching between Central Oregon and far southeastern Washington—rise to a narrow, fairly compact, but gorgeous alpine crest. At its northern end, the Anthony Lakes basin comes cradled by craggy batholithic peaks. The glaciers that carved their horns and knife spines are gone, but this high country still gets plenty of snow, which is the main attraction of the Anthony Lakes Mountain Resort. Snowshoeing is also remarkable in the vicinity, whether on the ski area’s trails or other national-forest routes, such as the lotta-bang-for-your-buck mosey to Black Lake.

See Oregon at its Wintriest Best With Crescent Moon Snowshoes

The above destinations are, honestly, but the tip of the iceberg (to use another frigid metaphor) for great snowshoeing in Oregon. But they should get you started—and you’ll be geared up in style with Crescent Moon snowshoes, including our innovative foam designs!